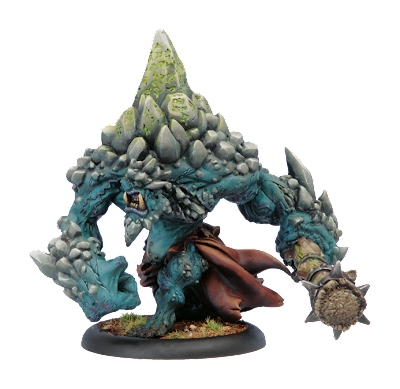 I think it was around Halloween of '08 when I had gone up to visit with the crew of PP for a party they were throwing; I had just finished the Juggernaut EX and was pumped about the response it got from Matt Wilson. By the time I got home I was itching to start a new personal project and I knew just what I wanted to do; I wanted to do a dire Troll character. Over the next 4 days I was in a sculpting frenzy, since I was between business projects I could devote all of my attention to the new sculpt. Usually when I sculpt something a story begins to form about it to explain why does he look the way he does. In this case I liked the idea of Hoarluk Doomshaper and his ties to dire trolls, if I remember right he disappeared into the wild and came back with a strange hold over the dire trolls, the idea I had was that during this time he went on a quest to find an ancient Krielstone high in the frozen cliffs of the mountains, little did he know that it was attached to the back of the most primeval of trolls. The beast had been waiting for him as Hoarluk's comming was prophesised, bestowed the name Dommshaper upon him and performed the trollish blood bonding ritual as well. The idea being that the dire tolls smell the ancient blood of their elder running through Hoarluk's veins and it is this blood that gives him such an affinity for the warbeasts.

The Concept that formed around the Dire Troll was that he was one of the most eldrich of his race and his massive stone like growths upon his back had some ancient and forgotten text carved into it turning him into a walking Krielstone. Whether the runes' power bestowed a greater-then-average intelligence or it was because of this intelligence that he was chosen to receive them was a mystery. But he was a walking artifact of a time before man and the trollblooded were still young.

The three things that I focused on for his character was his scars, his krielstone and his pose. Since dire trolls regenerate they don't bear scars, but this guy has a huge one going across his left side. His left eye, chest and arm have a trench of stone growths protruding from puckered flesh and originally his arm (where the club is) was a mass of jagged rock turning his fist into a savage living mace. I was attempting to make it look like he had his hand wrapped around something that might have exploded, something magical and volatile that did such damage to him that his regeneration could not cope, instead replacing his flesh with the calloused stone-like protrusions that usually form on the back and joints. The huge growth from his back (his quills of youth replaced by the mane of shards to signify his age) was turned into a krielstone, he would be the guardian of whatever knowledge had been carved into him until his death. The last was his stance and this was tricky. Practically every dire troll is rushing to get at the enemy, all pissed and yelling. That didn't seem right for something venerable like this guy, to reach his age he would have been more clever and maybe because of his age, more grim. Sure he was still dangerous and easy to anger but I wanted him more wise and battle hardened. Instead of flipping out I imagined him stalking across the battlefield, implacable and inevitable, saving his anger for the mighty blow that would surly come once he arrived at his destination. So for this, instead of a charging motion I went with a stride and a look of impending doom on his face like someone was going to get it.

Once I finished I told Matt and Ron about it, sent it up with the proposed idea and awaited their response. They liked the sculpt but sent it back with one correction; his left arm that was the mass of stone was to be replaced with a whole hand and was to carry a club. Some sketches of what they wanted was provided and in a couple of days was sent back up with the new bits. By December of '08 painted preview pics were posted and that is when I learned that he was to be called "Mulg.' I still don't know just how much of his character concept was kept as I have yet to get the Hoards book he is in or have been able to read his fluff, but I'm pretty sure that's him on the cover of Metamorphosis.

So, how cool is that? For a lowly sculptor to whip up a mini in 4 days and get to have rules made for him and to appear on the cover of a rule book? I seriously doubt that any other company would have done that, so my hats off to Privateer Press for putting up with my patented brand of spaz, it was a nice little ego boost to think that one of my own ideas would influence the game.