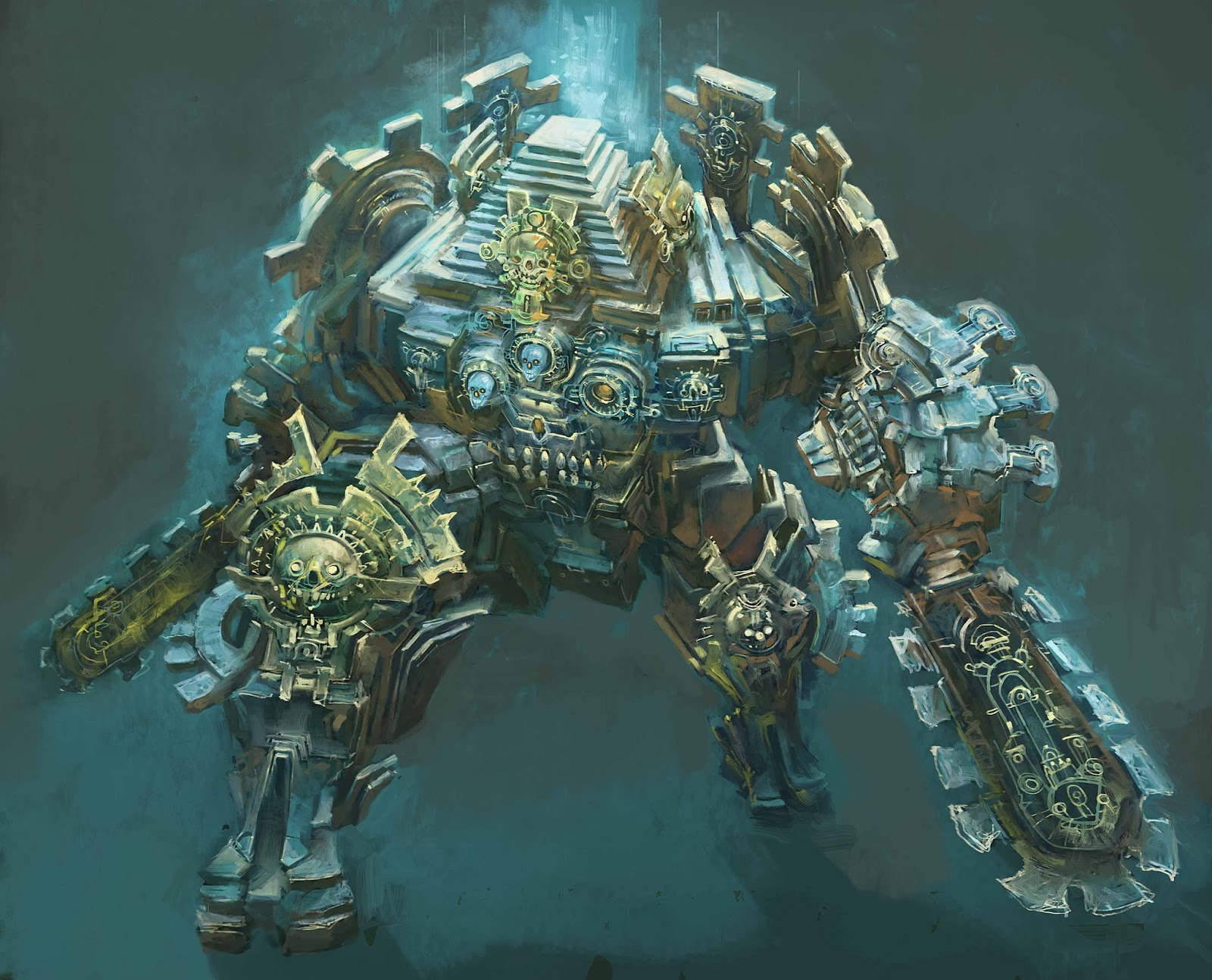 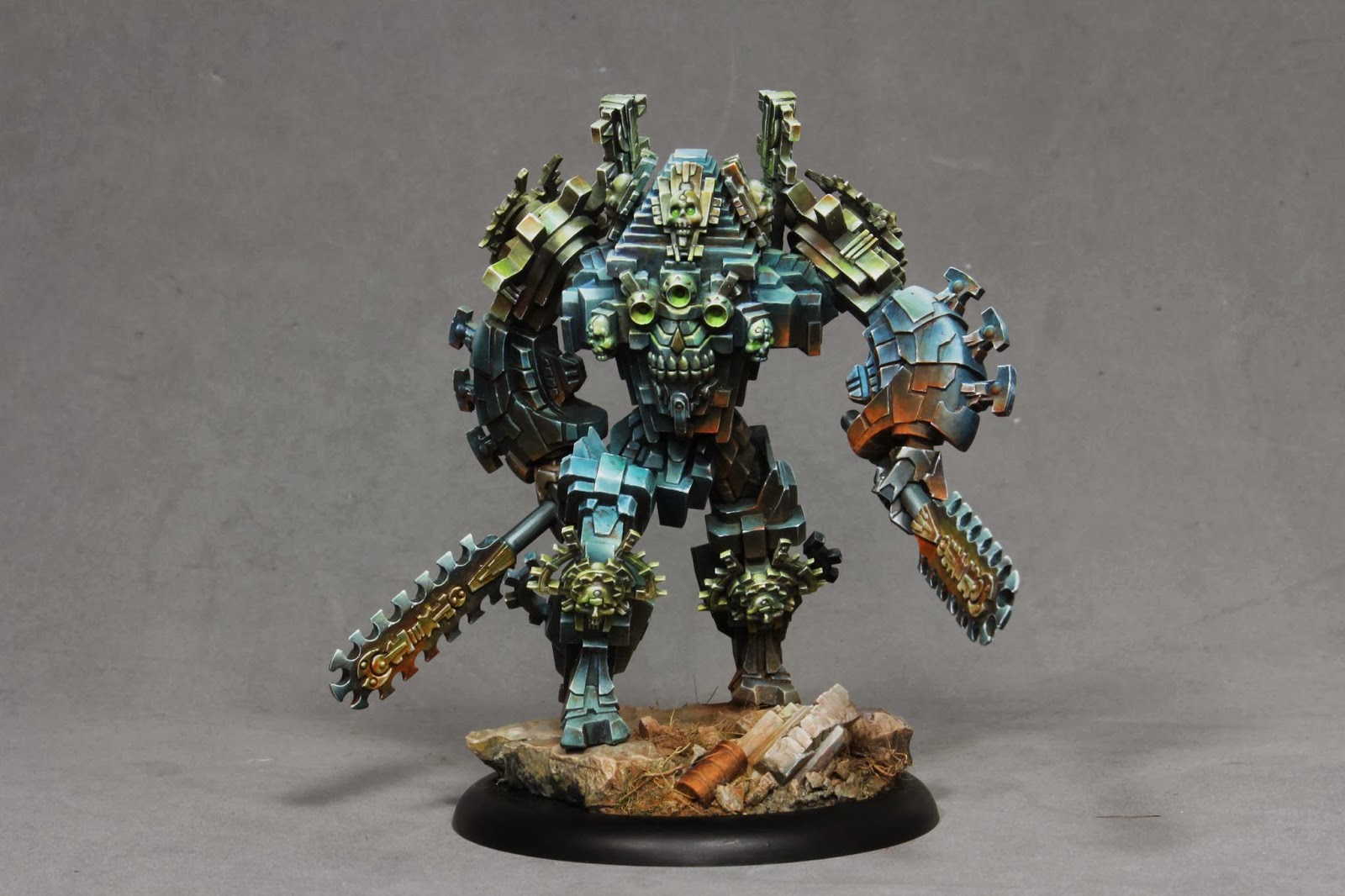 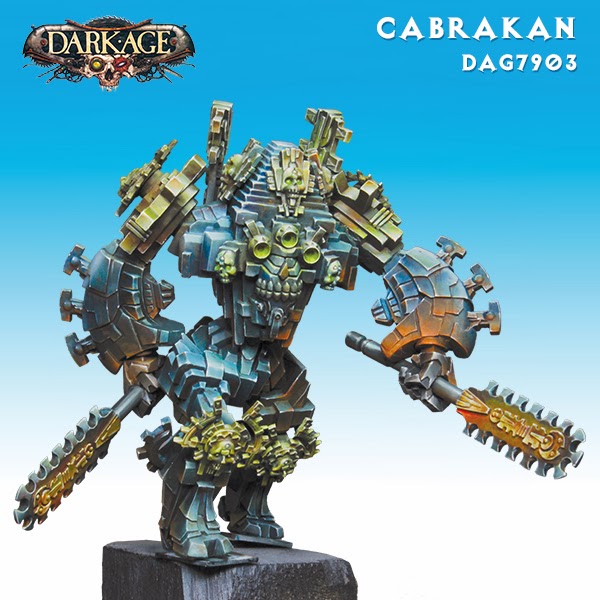 This guy was a toughy, and not because I had Chaka-Khan's song "I Feel For You" stuck in my head for weeks. The difficulty lay in the concept art... There wasn't any. Only the finished art which is great for portraying ambiance for the faction but not the best for figuring out how everything is supposed to work together. Attempting to convert a 2D piece of art like this into 3D and you end up with a lot of objects occupying the same space that shouldn't. On top of all that he's not a conventional mecha design. No obvious joints or hinges so it was difficult to create limbs that looked like they could work with nothing but angles.
The stipulations I was given was that; 1: he needed to fit on an 80mm base, 2: there had been a skull already sculpted and cast in clear resin that was going to be included with the kit, (three crystal skulls for the chest) and the model had to have slots for them. And 3: try to make the figure look as close to the art as possible.
There is a lot going on in that picture, so an attempt to extrapolate size assuming the skulls were 28mm human scale was the first order of business and everything was made from that presumption. I made him bigger then normal because he's supposed to be a walking monument and I wanted to make sure that was conveyed when placed on the board. Lots and lots of planes and angles, more then any other inorganic I've ever worked on and each had to be shaped and cut before the next one was added on top of it. I even had Derek Osborne stop by to give some help with deciphering some of the art, for example, I had no idea what was going on with his arms. To me the artwork made it look like his forearms just sprouted blades. Derek asked, "Where's his hands?" and I replied, "...Hands?" Yeah, lots of fun.
Anyway, hope I didn't disappoint any Dark Age players out there.

Pictures provided with permission by Cool Mini or Not.
Posted by monster.0 at 4:31 PM