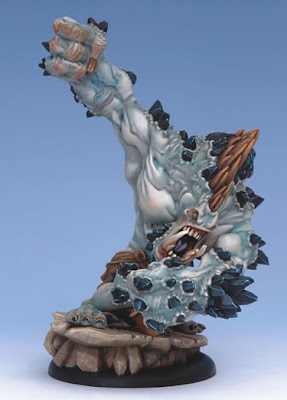 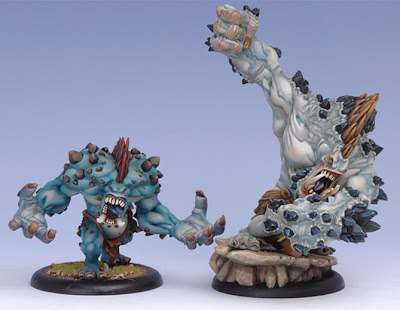 This guy was the first in the "Extreme" line of minis put out by PP but that is not how it started out as...

In my last post I talked about how it had been 3 years between when the Dire Troll Mauler was done and its release, three years of sculpting in a production capacity and expanding my repertoire of techniques. I was on a hiatus from sculpting after my move from the Seattle area and was working as a temp elsewhere.
One of the perks about working for Privateer is that you get SWAG for the projects that you worked on, one day I got a package in the mail from PP that had the brand-spank'n new Hoards Primal book in it and I was blown away by the artwork on the cover. The Dire Troll Mauler was on the front getting ready to put the beat down on a Titan and it was glorious! THAT was a picture of a Dire Troll; texture, dynamics and rage. I had begun to think that if I had some conceptual artwork to do the original DTM how different would it look? The picture inspired me to give the sculpt a second try and this time since it wasn't going to go into production I could use whatever material I wanted to make it.
This time I started the guy out of Fimo; an Aluminum armature with Greenstuff to bulk up the general shape and finally Fimo for the detail. I did a little work for Randy Bowen of Bowen Designs and read a kick-ass article about sculpting concept Maquettes for movies http://www.conceptart.org/forums/showthread.php?t=18287 and I was eager to try out a whole new bag of tricks . Also, I planned to cut him up as you would for production as I was attempting to teach myself mould making with room temperature vulcanizing materials and I thought this could be one big self taught lesson for me.
Rough sketches were done again but the whole thing was sculpted with a more free form whatever-looks-good approach to it. Besides the book cover what was really inspiring me was Peter Jackson's movie King Kong, I always thought the Trollblooded were pretty apish looking so this movie was perfect inspiration to help add to it all. In fact, the facial expression I used for the Troll was inspired from a particular scene in the movie where the crew is attempting to escape on their landing boats from Kong as he chases after them through a seaside cave. Some of the crew are firing their rifles at him from the reefs and as Kong passes by one the crew mate manages to piss Kong off enough that he grabs the guy and bites his head off. I loved the look he had on his face and I kept rewinding that part of the movie so I could see it over again all the while mimicking the facial expression and making adjustments to the sculpt.

Since this guy was mine I didn't worry about size restrictions, I could make him the size I thought he should be. Normally you have to make sure the width of the feet have to stay within the inner bevel of the plastic base which can lead to some awkward looking poses but again that was something I didn't have to worry about. I could get the dynamic stance I wanted and to get around him fitting on a base I would just make a piece of terrain to go on top of the plastic base. Problem solved.
I also decided to make a couple of weapon variants for his forearms; one was a set of crude looking blades that would replace his natural forearm spikes made to look as if they had been riveted directly into his flesh and I made a couple of stone obelisks attached by a length of chain that was bolted to his arms. His upper body pose could look as if he was punching with his standard arm spikes, slashing with the chunky blades or whipping wighted chain in a spinning arch. (The alternate weapons were not used as the marketing strategy they were shooting for meant that it could not brandish anything that they didn't already have existing rules, but if you own the DTMX and wondered about why the forearm spikes were separate, that's why.)

Just at the time that I finished sculpting the DTMX it was time to attend one of my favorite conventions. The Portland Lovecraft Film Festival is my chance to catch up with friends from out of town and previous PP coworker Jason Soles is a regular there. I mentioned the Troll to him and he said he wanted to see it so I bought it with me the next evening to show him off. If any of you have met Mr. Soles you know he usually has a slightly evil smirk that could mean just about anything, well, I found out what that smirk meant about a week later when Matt Wilson emailed me.
Matt said that Jason had told him about the Troll and wanted to see it, maybe make a limited run of it for the PP crew. I sent it up and Matt responded with a desire to purchase it. Ironically this was just before Christmas and my temp job laid everyone off to save money over the holidays. With my first freelance sculpting check in hand I began to seriously contemplate sculpting as an actual job. My girlfriend was totally behind me and I have been doing it since.

So, this guy who started as a personal project turned into my gateway as a freelance sculptor as well as kicking off the Extreme line of alternate gaming minis for Privateer Press.