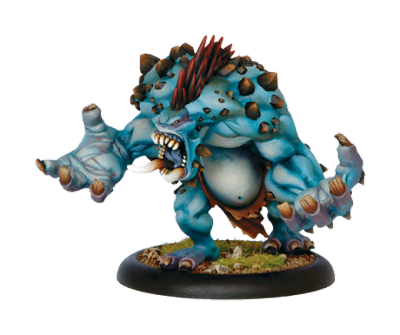 So I thought that I would give a little back story on some of the minis that I've done for Privateer Press since what most people get to see is the finished product. The first one I wanted to talk about is the original Dire Troll Mauler since it was one of the first production figures I ever did. This guy was done sometime back in '03 and unlike most of the other figs I did this guy didn't have any conceptual art to work from. Usually the sculptor is provided with artwork that shows off the details, poses, multiple angles, size and sub notes; all the info the sculptor needs to get the figure done how the client wants it. This guy however was a test.
Mike McVey had invited me over to his place to talk about a future project that he wanted me to work on, when I got there he broke out the Monsternomicon and showed me the picture of the Dire Troll and asked what I thought about sculpting it? Funny thing was is that since I was trying to get Privateers attention I had been sculpting figs that were inspired by their work to show to them and when I had picked up the Monsternomicon and saw the Dire Troll I had already decided that I was going to sculpt one anyway so when Mr. McVey gave me the project I jumped on it with genuine enthusiasm. This project was to see what I could do with an actual figure assignment and since Hoards was projected so far out they were safe if I screwed it up as they had plenty of time to reassign it to a more competent artist.
I am not a fan of sculpting with Greenstuff, I've rarely ever gotten what I intended when using it but it seems to be a current necessary evil in the industry, (if you don't know why I'll talk about that in a later post) and at the time PP didn't have a standard system for dealing with Fimo (which is primarily what I use) so Greenstuff it was. Mr. McVey had given me a rough size restriction which was to make him no bigger then a Warjack, that he had to fit on a large base and that the pose had to be dynamic. we talked a bit about what would look good with me stomping around the McVey's living room striking poses that we thought might work for the sculpt. I did some rough sketches when I got home and then I went to it. Because there was no due date There was a lot of experimenting and corrections done to him, I think it took around 6 months to finish him off and even then there were issues with certain bits on him, specifically his quill-hawk which had to be redone several times to ensure good castings.
I had gone to work directly for Privateer as a caster then a mold maker and sculptor and moved out of the Seattle area before this guy even went into production for Hoards. By then I had done a bunch of figs for PP and had gotten more familiar with the whole process but this figure is still pretty special to me as he was my first sculpt.

Picture provided by Privateer Press and paint job (I think) by Team McVey.
Posted by monster.0 at 7:45 PM