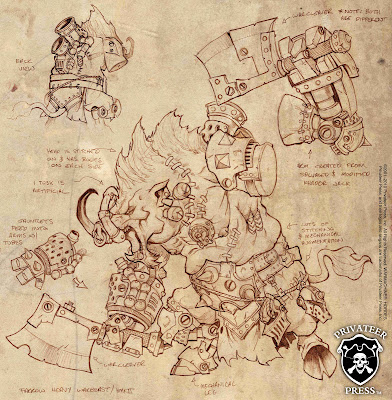 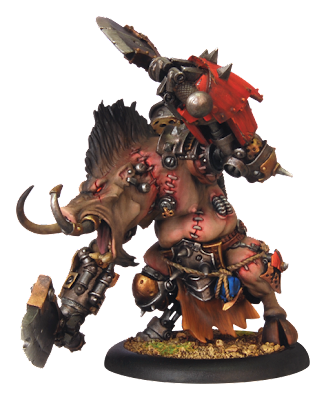 Here is the latest figure (that I can talk about) that I did for Privateer Press; the War Hog. It's rare that I feel good about my sculpts after finishing them, they usually look like so much chaos with an upwards of four to five different mediums to get the desired effects. It isn't until after PP posts pics of the finished painted figure that I end up feeling a little better about it. This guy was an exception and I had a satisfied feeling of accomplishment once he was ready for shipping, but that didn't mean that I was without doubt...
For me, when sculpted a monster its fairly easy. I make the armature, bulk up the body and start the anatomy. By the time I get to doing the details like hands, face armor, etc. I already have a good idea of what he looks like overall. When sculpting a jack its bass-ackward; all the pieces are done separately and then put together to make (I hope, I hope) the finished figure. Things get more difficult when you end up with one piece that acts for both a left and right part to get a complete picture of the figure as a whole. The War Hog was something of an amalgam of both which ended up with me putting in late nights and early mornings questioning my skills and choice of vocation. All the cybernetic limbs had to be sculpted first, assembles onto a piecemeal armature and then the meat parts sculpted around it. If I screwed up the scale of the limbs it would mess the whole thing up.
I was even more happy to see the painted pics, the painting crew at PP did a great job. I hear this mini is going over decently with the Warmachine/Hoards players so I'm looking forward to lurking about on the forums to see what kind of paint jobs and conversions people will do to him.
Picture provided by Privateer Press, painted mini by Privateer paint team, concept art by Chris Walton
Posted by monster.0 at 2:20 AM