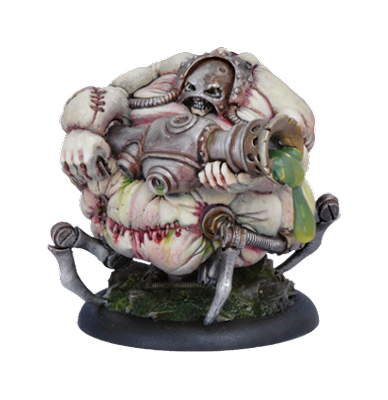 Quick-ish post as I am supremely busy at the moment. The Bloat Thrall is one of the few Cryx figs I worked on, originally it was sculpted by another artist but PP was not happy with the final project so they gave the job to me. I was in the mold making department at the time so this guy had a tight deadline and it had to be done on my spare time. The tough bit about it was how big this guy is. I mean, he has a lot of mass all the way around, huge pieces lead to deformations in the molding process but at the time it seemed unavoidable. Not only that but all that pewter balanced on those spindly legs... Geah! One of the fun things was that the back detail only showed from the lower back up and me with my logic decided it made seance that if this guy was a giant skin sack holding caustic fluids that you would want all orifices that didn't lead to the gun closed off, right? So, stitch up his butt. I didn't think too much of it at the time but I guess it ended up being kind of a big deal, sorta like the junk on the original Dire Troll Mauler. I think Matt makes sure that any concept art I get now has any ambiguous spots on the sketches clearly detailed.
Pictures provided by Privateer Press, painted by Team McVey