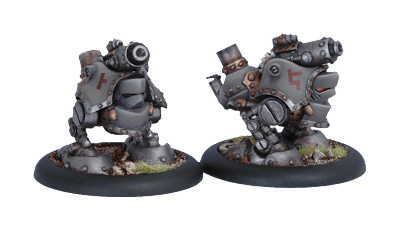 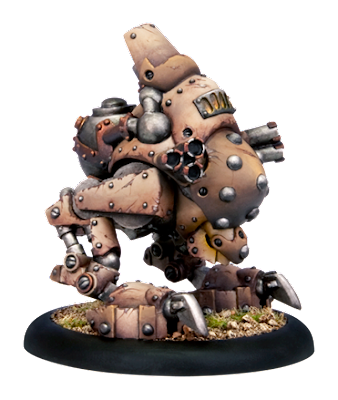 The first jack I did for PP was the Grundback Gunner, a wee chap who people on the forums call "gun bunnies." I as mentioned in the previous post I like to make figures pose-able and since I knew these guys would be fielded in groups I made sure there was plenty of ball and sockets on them. (Kinda hard to make a dynamic figure when all you have to work with is legs but I did my best.) Something I suspected but was never told was the possibility for weapon variants so I made sure the gun was separate. The one thing that I find odd is that every picture I have seen of the figures they are leaning back as if they are looking up at something. Its weird to me because all the art had them leaning down with their head closer to the ground and their ass up like a sprinter getting ready to bolt. Oh well. The guns for the Blaster version of this jack was done by a different sculptor, I don't know who otherwise I would give him credit for it.
The Basher, my boy! One of my own designs and I'm pretty happy with how he turned out. Back in January of '08 Ron hit me with three jack sculpts at once and all were of the highest priority, Normally it takes me about a month and a half just to get one done but I had three to do in the same amount of time. Needless to say it was the first deadline I missed. I make jacks bass-ackwards from doing monsters; with monsters I build the armature and add the muscle mass so by the end of it I know what the figure looks like and then cut it up for molding but with jacks I have to do all the bits separately and then fit them together after the fact. So I had a lot of failed pieces that were either too big or just not shaped right. While waiting for some putty to cure I started to fiddle around with the scrap bits, putting them together and I started to get a shape I was liking. After an evening of thought I got the epiphany of doing a Rhulic jack and began constructing the bits for a big two legged engine.
Since almost all Rhulic jacks are practical and functionary devices turned into something to be used on the battlefield this guy had to be the same. So the story I had was that down deep in the mines before the tunnels were shored or had the wench systems for the ore carts these jacks were used to drag out the heavy stuff, effectively mini locomotive engines with legs they would haul out the rubble and ore carts to the higher levels. One of their quirks was that they were single minded and bad tempered, something to do with the low grad cortex they were given but they were notorious for injuring inattentive jack marshals. Stomping on toes or shouldering workers into walls as they tromped up and down the shafts. Some of the ideas I had for the rules was that they could tow larger jacks into battle faster allowing the more heavy jacks to get out on the front lines quicker. The other was a ramming attack, the idea was that every round they stayed in motion their distance would increase incrementally as would their damage but it had to be in a forward cone like direction.
Since I'm not a rules guy they changed much of it but kept the spirit which pleased me (they were only ideas anyway) and they added (and subtracted) some detail to the figure. A front boiler plate was added (makes no sense to me as the boiler is in the back and a front mounted one is a big weak point in the armor) the grenade launchers were also put on his sides (I like that) but they took out the joint I put in the knees and tilted his toe talons up instead of digging into the ground. The knees is what bugged me the most but luckily I made a RTV mold of it before I sent him off so I have plenty of ultra positionable Bashers for me.
This guy and Mulg are the only figures I have designed for PP so far.
Pictures by Privateer Press, paint by Team Mcvey