Ironback Spitter, King of the Koopa's 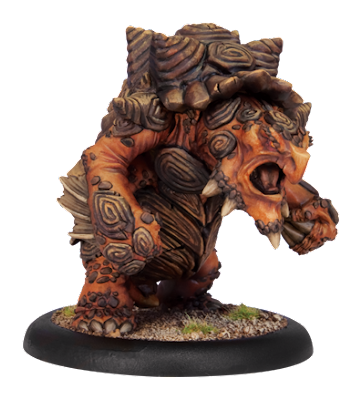 Story time!
So, back around '00 I worked at a gaming store in Seattle called Games and Gizmo's and Ron Kruzie was one of our customers. He had his award winning fantasy beastman army on display there and would come in and play his Imperial Guard army or do some work on one of his latest projects. He had planned to do a lizardman army and wanted to do a special project for his Slaan mage as he didn't like the howdah version that was available at the time. He wanted to have his priest riding on top of a giant snapping turtle and I did some concept sketches for it and gave it to him. Soon after G&G went out of business and forced everyone to go elsewhere for their geek-fix. Years later I was working at Privateer Press as a sculptor/mold maker/caster and Mike McVey had bought on this freelance painter for the mini's line and low and behold it was Ron. After I moved out of the area Ron went full time and is to this day they guy who I deal with directly for my Privateer jobs.
Skip ahead to summer of this year and Ron sends me the concept art for the Ironback Spitter. We talked on the phone and during the conversation I remind him of the Slaan mount I sketched up for his army and we both had a laugh at the irony; 10 years later and we finally got around to working on a snapping turtle.
If PP kept the parts breakdown like I did them I managed to slip in ball and socket joints at the torso, shoulders and neck to hopefully add a little variation when people put the guy together.