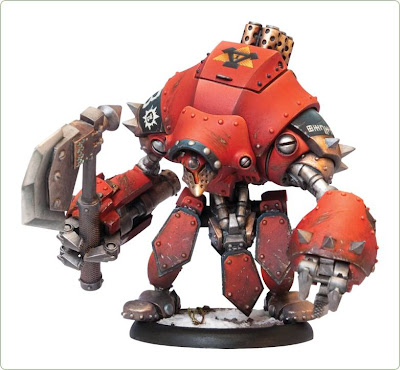 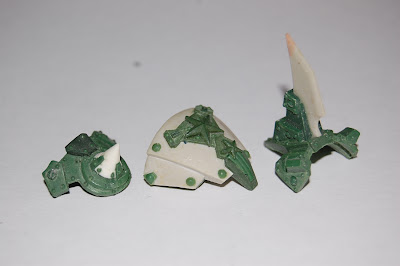 I'm not a big fan of my own sculpts, I'm not sure how others in the business view their own work but but for me I constantly see mistakes and things I should have done. Time constraints and mold restrictions pretty much ensure I am always releasing stuff that I am never satisfied with but if I had to pick a favorite miniature it would be the Khador Extreme Juggernaut. Right after I had finished the Warp Wolf Extreme I asked Matt if he had any requests and he said he would love to see an Extreme Destroyer. Funny, since I was thinking just about the same thing and all I needed was an excuse to do it. Khador's jacks are some of my favorites, I really like the design and the concept behind them but how to make it fit into the "Extreme" line? First was size, it had to look like it would go toe to toe with the scale of the other Extreme figures, also, Khador jacks are the biggest on the battlefield due to the fact that they use the biggest chassis and the most armor out of all the armies so if I was ever going to do any other jacks for this line then this guy would be the biggest. It also had to be beefy enough so that customers would feel like they got their moneys worth, since it was probably going to be on par with the price range bracket of the other Ex figs I didn't want to put out something that made the customer feel like he was getting left out. But what else? Extra stuff? No, can't add anything that could be misinterpreted or effect the rules and just adding pretty flourish seemed weak. What I thought would do the trick was articulation.

I love action figures and how the sculptors are able to hide points of articulation and with the Jack here was a great opportunity to do just that. I wanted to make a figure that would give the modeler the opportunity to maximize the custom potential and ensure that no two would look the same. I asked Matt for the original artwork for the jacks and began to go over the sketches. Something I try to incorporate in my sculpts is a level of plausibility and with the Khador jacks there are some design flaws that make it look unworkable as a robot; namely the elbows and shoulders. Going back to the original artwork I immediately saw where I could change it and give it the articulation that it needed. First was the shoulders; a rotation point was added there so that the arms could swing forward and back while the ball socket (that seems to get used for the full range of mobility in the arm with previouse sculpts) would handle the pivot outward and in, with these two points added the figure already had a massive leap in believability as a working automaton. Next was the elbows; the connection point normally was midway down the arm and while this gave it a battering ram look it didn't give it reach. It reminded me of a T-Rex which is a detriment to something that uses its arms for combat so the elbow was moved farther back . Also the angular rectangle aspect of the forearm was rounded out because I wanted to add wrist articulation as well. I haven't seen the pewter version of this but the original had articulated fingers too, this way the builder could decide which hand they wanted the weapon in and it also meant that if any variations were done only the weapon would have to be sculpted. There was only one point I had to sacrifice and that was the knees, originally there was a pivot there but by that time I didn't think it could structurally stand having another possible weak point and with this thing being cast in pewter the knees were too iffy so the thigh and lower leg were made as one piece. But with a ball-and-socket in the hip and ankle it still had some pretty spiffy articulation in the lower half.

I sculpted him almost entirely from Magic sculpt, a tough 2-part epoxy that when dry is like a rock, I can cut, sand and drill it without worrying about it tearing or shattering like greenstuff or Milliput. It took me about a month-and-a-half to two months to finish him up but once done Privateer didn't know what to do with it. Sure, it looked great but the logic was that it made sense that monsters like Dire Trolls an such could grow, jacks don't. Yes, this makes sense to me as well but since I was asked to do an Ex version of the jack I'm not sure what was expected; a jack the same size as all the others but with a really big ass base? So, he sat on the shelf for... what, a year? I don't remember now but it was quite a while. During that time I did a rush of Khadors jacks, Drago, Beast-09 and the new, revamped Juggernaut. But, there was a problem with the new Juggy and apparently something catastrophic happened to the original sculpts and Privateer didn't have a replacement for it... But I had. I got a call from Ron describing the situation and asking if they could get the Ex from me. They would shrink the jack down to the appropriate size and use it as the basic jack for the new plastics (something I had suggested a year prior but was rejected) I said "sure" and gave them a price break on it as well. Normally I get paid a bunch more for the Extremes but since this wasn't going to be released as one I went with the standard cost of what a jack normally goes for. Well, it got released as an Extreme and the basic plastic jack AND used in the Grind game. So, I guess they really got a deal out of me.

I had big plans for this guy, I put a lot of forethought into the design and customizability for the figure and planned to do weapon variants for the different jack types. One of them was the Destroyer but PP didn't like the alt pieces I made and got Sean Bullough to make new ones that resembled the original concept art. I had also begun to make "prestige armor upgrades" pieces that would fit over the existing model allowing for further customizing, giving the jacks a more unique look with bits of flourish and character. These parts were not wanted by PP and never went into production. I've included a picture of two pieces of shoulder armor and a piece of cowl armor with a blade that would have fit on the armor over the head.

Whether you like him or not this guy was a real labor of love for me. I made him from the standpoint of "If I was buying this thing what would I want to see" and as far as product went he turned out pretty well. Tons of potential for the modeler as well as an intimidating presence on the board.
Pictures: me and Privateer Press, painting by Privateer Press staff
Posted by monster.0 at 1:28 PM