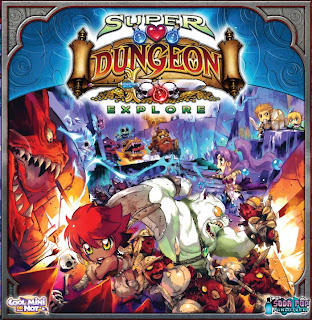 I've been doing work for Sodapop miniatures for about.. A year or so now? John Candice has been giving me strange and interesting projects to work on which has been testing me, I mean, just because you can sculpt something dosn't mean you can sculpt EVERYTHING. Or at least sculpt it well which gets me into some funky situations sometimes. One of the odd things about this job is that if you do one type of sculpt well you end up getting pigeon-holed into doing the same thing over and over again. John has been giving me some assignments that are waaaay out of my norm, so much so that I have been unsure if I can do the art justice. But he took a chance and asked me to do work on his Super Dungeon Explorer core system. He actually let me play with the designs and bounce ideas back and fourth with the final product. If you have the game, "Rex" and all the dragon hatchlings are stuff done by me. One of the coooool things I love is that after looking at the concept art and talking to Mr. Candice I came up with the wee flying dragon miniature, that ended up having it's own artwork by Andrea Confrancesco. Checkitout!


I love that, it makes me feel like I'm actually doing something to progress the hobby.

So far I've been hearing good things about the game, people seem to be taken with the mix of chibi figures and old school vid game theme of the game. Something new and invigorating for the industry, it can't be all warhammers and grunting steroid men with skanky women in ineffectual armor, every once in a while we need a push in another direction to remind us all of why we do it.
For fun.
So here is hoping you all have some.
Posted by monster.0 at 11:01 AM