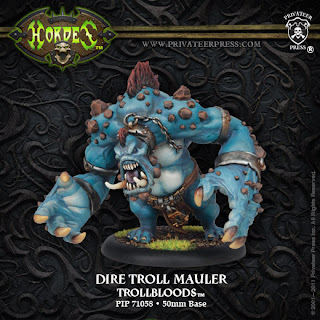 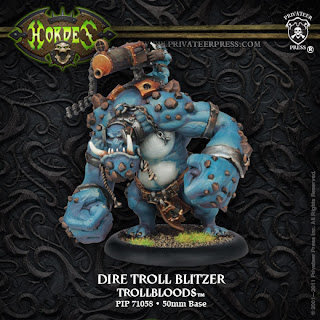 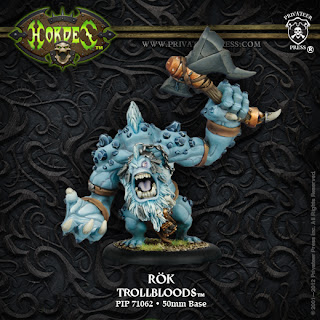 Dire Trolls, lots an lots of Dire Trolls. Privater has had me working on this project off and on for quite a while. It started with the Boomer (and getting all the kit parts set up for all the variants) and finally ended with ROK just a few months ago. So... Something like 2 years I think? Finally I can talk about it. The info on the Boomer has already been made here  http://monster-zer0.blogspot.com/2010/07/so-here-we-are-at-latest-incarnation-of.html if you feel like reading about it. The Blitzer was I think the only DT that I did not originally sculpt so now at this point I think I've managed to get my filthy digits on all the Trollblood's Dire Trolls. The Mauler was my first production miniature and was also based off of the art from the Monsternomicon and talks with Mike McVey where as this version had strict artwork to adhere to. If you are interested in reading about the Mauler you can find that here.  http://monster-zer0.blogspot.com/2010/05/so-i-thought-that-i-would-give-little.html. ROK was just finished recently and reminds me of Jerry Garcia on a bad acid trip, not sure what it is specifically but when I was sculpting him I had "Touch of Grey" stuck in my head for days. Uuuugh.

Pics provided by Privateer Press and paint jobs by Privateer's painting crew
Posted by monster.0 at 7:18 AM