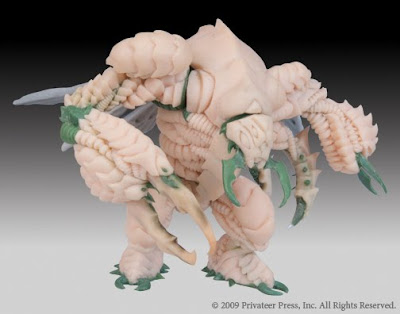 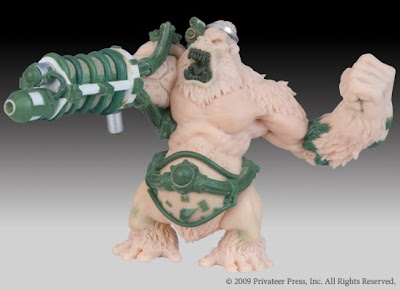 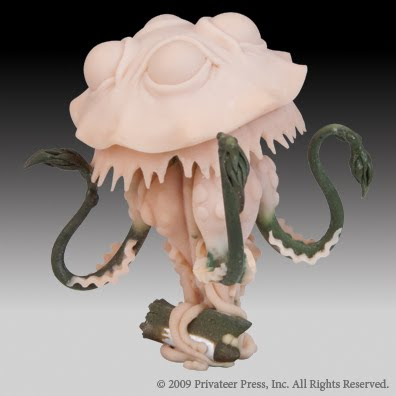 Monsterpocalypse was my big project for a while, I was under contract with Privateer for a year to complete the project and during that time I sculpted all the monsters and some of the bases for the Empire of the Apes, Lords of Cthul, Planet Eaters, Savage Swarm, Terrasaurs and the Tritons with the exception of the vehicles. I think it was sometime early in '08 I got sent the concept art for Terra Kahn as a test piece and right after finishing him up the concept art started flooding in. This was an amazingly stressful and busy time as I was cranking out something like 6 sculpts a month on the average and some of the designs were requiring details that I wasn't sure how I was going to pull it off. I even had to build special tools for some figures like Anglax to get that fish scale effect and once the fig was done I haven't used that tool since.
While I don't feel these guys are my best as I was so rushed it was a crazy trial by fire in creative problem solving which got me thinking it different directions. I had actually done so many figures and their releases had been so drawn out that I had forgotten what I had sculpted, I would see a picture online or down at the game shop and recognize a figure I barely have any recollection of working on. I was pretty surprised to find out that Monpoc is getting optioned for a movie, if I find it surreal seeing product that I have worked on at a game shop I can only imagine what it's going to be like seeing these monsters I worked on stomping around on the big screen.
The pics I chose to show for this are of the last three I did and to my knowledge these have yet to be released to the public. Also, I don't normally post pics of my "greens" so I thought I would do something different.
Empire of the Apes:
Gakura
King Kondo
General Hondo
White Dijan
Airborne Ape
Command Ape
Howitzer Ape
Stealth Ape
Frontline Ape
Rocket Ape
Lords of Cthul:
Cthugrosh
Yasheth
Mogroth
Ulgoth
Ancient Osheron
Meat Slave
Spitter
Squix
Task Master
Corruptor
Snatcher
Cthulabitr
Tanglex
Planet Eaters:
Gorgahadra
Rogzor
Xaxor
Zorog
Vorgax
Belcher
Crawler
Destructomite
Explodohawk
Chomper
Scorcher
Constrictor
Explodomite
Harbinger Comet Shard
Savage Swarm:
Mantacon
Mucustos
Dynastavus
Xixorax
Cliff Hopper
Razor Beetle
Spy Fly
Steel Back Roach
Dire Ant Warrior
Vice Pincher
Terrasaurs:
Armodax
Terra Kahn
Pterodax
Rakadon
Tyrranix
Brontox
Carnidon
Raptix
Spikodon
Bellower
Pteradactix
Spikasaur
Tritons:
Anglax
Krakenoctus
Crustaceor
Leviathron
Steel Shell Crab
Psi Eel
...Whew.
Pictures provided by Privateer Press
Posted by monster.0 at 12:53 PM