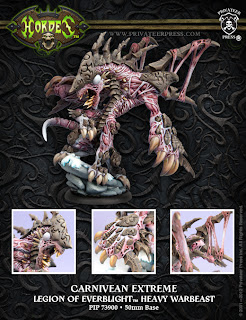 Wow, at last I can talk about him. This guy was finished in Jan of '10 and has been lurking around Privateer waiting to be put into production. This was the first Extreme sculpt that had concept art provided for me to work off of. All the others were my take on the icon creatures /machines of the factions but I guess they were nervous about what I would do with this guy when I started on him. Chris Walton did the art for it and drew up pretty much exactly what I was going to do already with a couple of exceptions; the skin texture was my contribution to the design, (something I wanted to do for the Carni as I thought it looked more disturbing and unnatural) and I didn't do the pose I was originally planning which was far more gruesome. Before I was given the art I had planned to have the Carnivean feasting on the corpse of a Dire Troll Extreme, the troll being part of the base while the Carni pulled great bloody gobbets from an exposed rib cage.  I thought it would have bought the whole Hoards beast thing full circle since it was the DTX that started it but maybe it's best I didn't, people can be so reactionary. Something I thought was funny is that PP plays their cards close to the vest when it comes to future projects so I thought it interesting that in Chris Walton's profile pic on the PP site that had been up for a couple of years had the concept art for the CX in the background. Accident or on purpose? Who knows but squint in the upper right of Chris's profile pic to see how things hide in plane sight. Anyhow, here is the latest of the Extreme sculpts and kudos to the painter who got this guy presentable in record time.

So, usual suspects for credit on this; pics provided by Privateer Press and paint by Privateer paint squad.
Posted by monster.0 at 5:24 PM