I did this guy... 11 years ago (I think?) on my own volition as to just do something I thought was cool. This was right about my transition between Greenstuff and Fimo. I can't remember exactly why I decided to do him but apparently I had planned for this a while back as I had the gun from the original Bloat Thrall I did cast up in pewter when I was originally sculpting him. I had nicknamed it the, "Septic Thrall" and I think I had been playing around with the idea of some kind of variant of the original, something to do with leaving nauseating odors that could give the opposing army minuses when in too close proximity to it's launched leavings. The guy on his back was a spotter/range finder for arching fire with the eye-plug in the Bloat Thrall's head a direct feed into the corpse to infer that the Thrall could see through the spotters eyes like an undead targeting system.
He sat near done for nearly a decade when last year I had been asked about it, PP wanted to use it and wondered if I could finish it up with a couple of changes. "Sure!" I replied and set to work completing a figure I had nearly forgot about. Originally the guy on the back was on a kind of extending pole which I got rid of, bought him down close to the Thrall's body and integrated it more. Something that at the time had stumped me was all the wires I wanted to put on him, I really wanted to get tubing spilling out of the back guy and make it look like loose intestines but I just couldn't make it work. I had set aside the figure until I could work it out and after a while, sorta forgot about it. But by the time PP had plans for it I was able to do that key, (at least to me) detail.
Anyway, been a long time in the making. 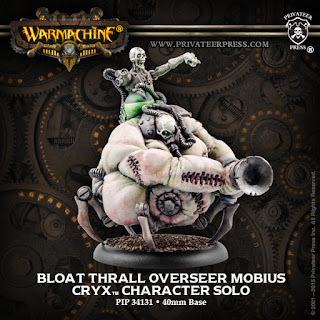 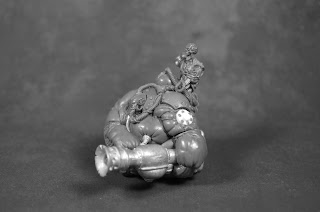 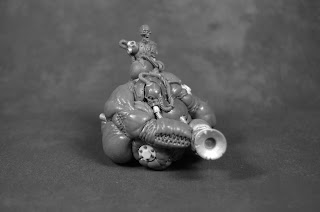 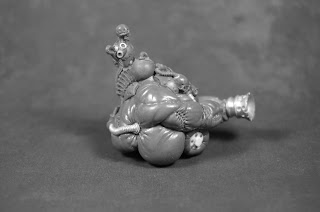 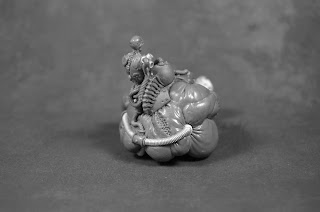 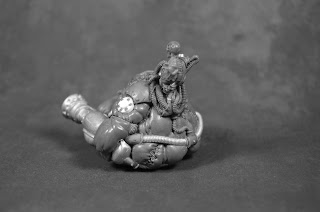 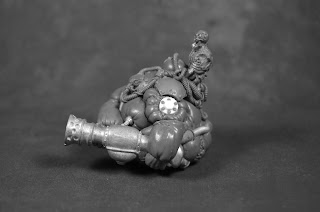 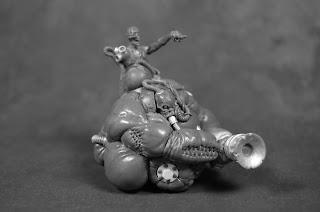 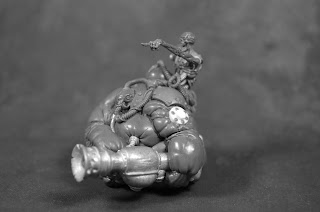 Painted picture provided by Privateer Press.
Posted by monster.0 at 6:41 AM