This is it, my last figure I sculpted for the game, the Overseer. When I saw some of the posts in the KS comments section wanting a Beholder-like figure I was snickering to myself. Something you should know is that I went way off-base with this guy as he wasn't even on, "The List." When looking over what the GG crew wanted I noticed there wasn't anything like a beholder-ish creature in there and I thought that would be a fun creature to have in a dungeon crawl game. So I decided to add this guy into my sculpting roster and see what Guillotine Games said about it. Again, it's a figure of my design and also, one that was not requested.

I've never been a fan of the original art of the beholder but I liked the concept. As years have gone by there have been plenty of artists who have done their rendition of the monster which have helped me appreciate the strangeness of the creature and assist in portraying it's general creepiness. I wanted to redesign it and make it more hopefully unique to the game.

Insectile mandibles instead of a slitted mouth, a crustacean carapace of natural armor and eyes everywhere helped make it stand apart but the tentacles were kind of a necessity and proved to be a hang-up point in getting this figure done. They guy was supposed to be floating but I was pretty sure the production crew could not do transparent floating stands just for one figure and sculpting some kind of effect to simulate flying sounded like a potential nightmare so the addition of tentacles seemed a necessity. I had done a set of them based off of a Portuguese Man O War but they looked terrible! Once I had all the tentacles on and got a good look in it's entirety I got very frustrated. This didn't look at all like what I was going for so I had to set it down for a couple of weeks while I worked on the other figures and thought about it.

Once I had a chance to look it over again I realized there was too much mass below the sphere of the body, it lost it's floating theme I was trying for and instead looked like it was balancing on a pile of tubes so I drank a bit of vodka to get up the courage to go after the figure with knife and cut them all off. Once that was done I restricted the tentacles to only three primary tendrils to balance on with a couple of smaller ones tucked around the bigger. This helped a lot in keeping the mass of the figure up high in the sphere where I needed it to be. After that I was much more happy with the sculpt; it had a touch of weightlessness, it had motion and it looked alien. The GG crew said they liked it and it got sent off. 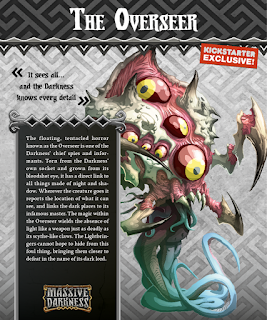 I thought this was an awesome idea and very I'm happy with the concept of it's origins and the art is great too!

Here are the pictures for the final sculpt... 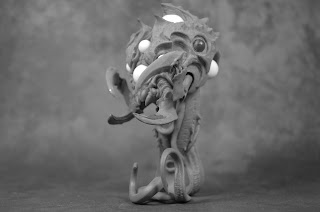 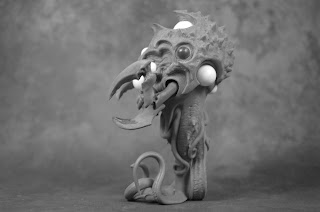 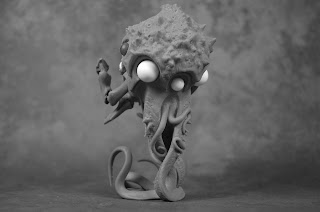 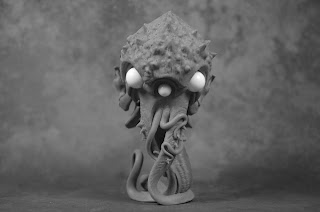 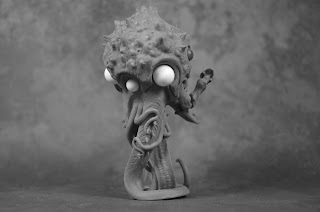 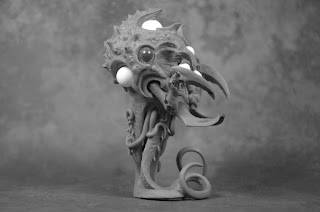 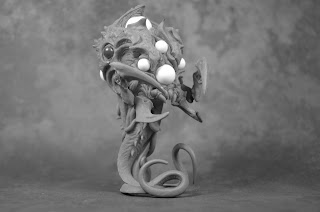 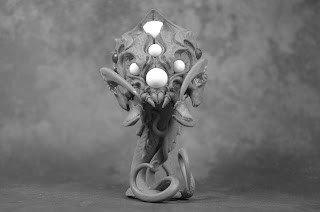 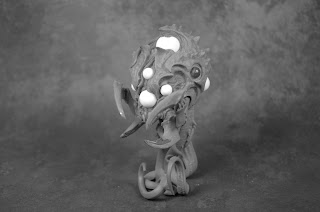 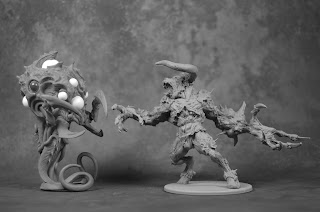 One last note: since you cannot see it, under its mandibles there is a sucker-like mouth opening. I didn't envision this guy chewing his food but rather using these articulated mouth-parts to scoop and stuff food into it's orifice. Fun.

There he is, the last of my contributions to this project. Hope you have fun playing it and enjoy fighting the beasts!