OK. I will admit it, I was sick when I did this. And I mean physically, not mentally. I had a pretty nasty head-cold and was wacky on the antihistamines and full-on lack of sleep. On top of that I was  away from home so I was sculpting on the fly but luckily I had a little bit of everything I needed to get him done. This guy was on the list GG sent me and was just named as, "Ogre."

Again, free-form sculpting with this one and considering my condition probably more so then normal. I remember I had made the smaller cleaver first, thought it too small, sculpted a bigger one and made it look as though he was leaning on it. Then, somewhere along the way I decided to use the cleaver I already had made and put it in his other hand because... I guess I thought he needed it? Right? I don't know, maybe he throws the smaller one first and uses the bigger two handed... Or maybe he's just that bad ass?

I had started the Cyclops Spear Maiden already but had to leave it at home since it was in no condition to travel so I worked on this guy instead. He was the second to be started for the project but the first to get done (and smallest) and I was sure that once I sent pictures off to the GG crew there was going to be a lot of, "What were you thinking?" comments. I had even began preparing a new armature for a re-sculpt in expectation of them wanting something a bit less over the top but they liked him and requested more. I wouldn't say I was delusional when I sculpted this one but fairly loopy for a while and semi confused with what I did when I got better so if you are wondering why I did it like this, your not the only one. The awesome picture the artist drew of my sculpt made me feel better about it all though. 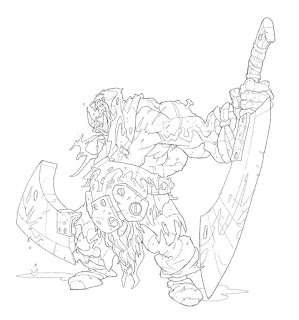 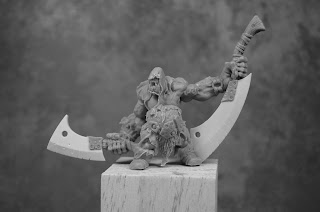 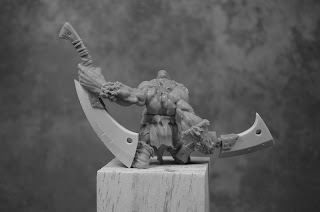 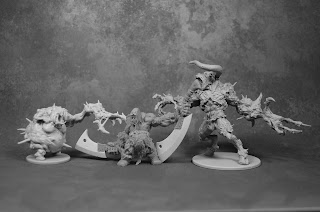