This guy just got unlocked so here's my post about it: This is another one of my designs and was part of a list of proposed figures for the game that had been sent to me from the GG crew. With only the description of, "3-armed ogre" I had quite the leeway with the design and I'm sure this figure, like several other of the sculpts they let me be creative with, was not at all what the guys at Guillotine Games were expecting.

I had pondered how I wanted to approach it and bounced around with ideas of an ogre with two arms on one side and one big one on the other but I was worried that it would just look like everything else I've sculpted with an extra arm sprouting out of it's armpit. I was suddenly taken by the idea of an elephant-type of creature and immediately remembered issue #4 of Conan the Barbarian where he meets an alien being named Yag-Kosha who was trapped and tortured in a wizards tower. The imagery had stuck with me from early childhood when I used to read my dads comic collection since I thought the idea of an man-elephant was an odd idea for an alien. Then there was Chaugnar Faugn from the Lovecraft Circle of writing that bought up some interesting ideas for inspiration. With that in mind I began sculpting and saw where it took me.

Usually when I get to sculpt like this I can add or discard ideas as I go since I'm not beholden to any artwork. With only a general idea of the overall look I got to have fun with the design and try to create something unique for the game. I didn't want it to look just like an anthropomorphize pachyderm and felt it needed to appear more alien; more like this species had a resemblance to an elephant rather then an elephant that mutated, if that makes sense. The "trunk" became more of a tentacle arm with claws that roughly resembled his hands with the over-sized central claw detail carrying over all three arms. Midway sculpting the face I changed my mind and what were originally going to be tusks became more like mandibles. I also decided to change the idea of teeth and instead sculpted a beak like a squid's, with an extra set of eyes and ears added to the overall strangeness. A spiky back, elongated cranium, freakishly long arms and a squat frame helped to make it look less human.

Something that surprised even me, which is odd since I'm the one sculpting it, the clothes ended up becoming more elegant then a lot of the other roaming creatures in the game (hopefully) giving it a feeling of intelligence and hinting at it's own culture. It has a lack of forged weapons as I had originally thought of him as a monk-type of fighter, (hence the Shaolin style brass rings on his wrists,) but he could also easily be some kind of arcane spell caster... Or both? I didn't know just what the GG crew had planned for the 3-armed ogre but I figure they would find some place to fit it in if they decided to use the sculpt.

So there you have it, love it or hate it, another one of my attempts at creating a new race that breaks away from the Tolkien or D&D tropes of fantasy creatures but not TOO far as I didn't want to alienate people, rather challenge their imaginations. I guess we'll see how it is accepted. Again, the artwork was based off of my sculpt after it was done and my thanks to the artist. 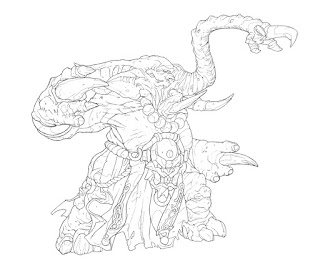 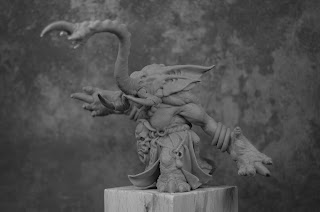 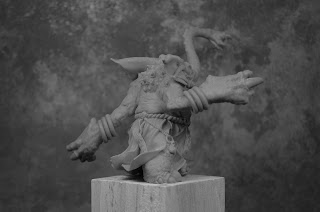 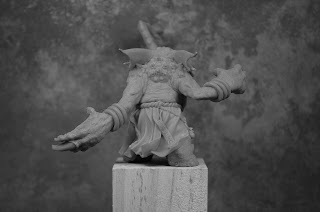 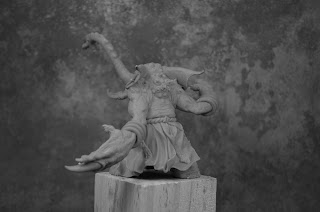 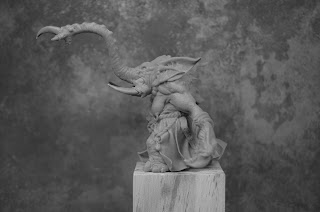 BTW, the nicknames of "Kevin" for this guy and "Bob" for the nightmare Thing were given to them by the GG crew.