In 1993 Steve Jackson Games released a supplement to their GURPS line of games called "Atomic Horror." This book was to allow players a chance to have adventures in the B-grade movie style of sci-fi genre that were popular during post WWII. For those who don't know the game, GURPS stands for "Generic Universal Roll-Playing System" and was a set of rules flexible enough that could allow game masters and players the freedom to create their own settings with supplement books like this to help out with both specific parameters for the rules and inspirational material for adventures. 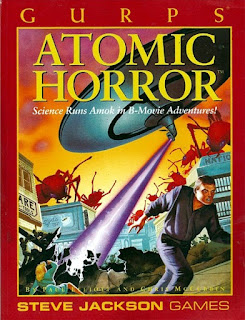 Why am I even talking about this? Because this was my first paying job as an artist in a genuine publicized and distributed format. But keep in mind, I was not THE artist of the book. Turns out that David Plunkett (who is THE artist of the book) was a neighbor of mine back in my old home town and at the time he was working on this project. I was a wannabe comic artist and he asked me to help out with meeting his deadline for Steve Jackson Games. He gave me 5 pages that he had roughed-out in pencil that I was to clean-up and detail for him so that he could ink them. I was to get $10 per page and I had about a week to get them done. I accomplished my task and Dave was good to his word and I got $50 for my effort and trust me, I was ecstatic! No joke, I was seriously thrilled just to get to be involved with it. Plus the $50 was a big deal since I was working a minimum wage job at the time which in '92 was something like $4.25 an hour.

I had asked Dave if it was possible to get my name in the book somewhere and he said that he would let the publisher know about my assistance but no promises. About a half-a-year later Dave gave me a free copy of the book when it got released, he was unable to get my name in it but I was still pretty happy about it all. About 2 weeks later I had my first, (of many,) geek-surreal moments when I visited my local hobby shop and saw the book on the new release rack. It was so odd to see something I had worked on right along side all the other gaming books. It's a feeling I still get now whenever I see one of my figures out in the wild or on someones gaming table and I don't think I'll ever get used to it. Not sure I want to either.

A few months ago I was looking through some of my art books I have on my shelves and ran across my old copy of Atomic Horror and for the slightest fraction of a second I couldn't remember why I had this lone GURPS book wedged in there, and suddenly it all came back to me. I opened it up and saw Dave's autograph on the first page and began to think of everything that's happened since then with my vocation and how fluke-ish my life has been in general. Dave's went off in it's own direction too, if you feel up to it stop by his website: http://www.artbyplunkett.com/

Thanks Dave! And I'm sorry I stuck you with getting Hitler's face right for his moon landing. (P-102)