This is one of my designs and the first figure for the Massive Darkness project I began work on, (but not the first to get finished.) GG had been given a list of monsters they would like to see made but after that it was up to me as far as aesthetics go, I had been provided concept art for the hero figures and some of the monster to give me an idea of what they were wanting but I must admit, I think I may have disturbed some of the crew with this figure after I sprung it on them.

I've been the, "big monster guy" for a long time now and what I've noticed is that I am usually asked to do heavily muscled, steroid infused masculine figures, and rarely do I see anything that resembles female unless it's in a battle bikini and is less monstrous and more like someones fantasy dream woman. I wanted to make sure the game had unique and memorable figures so I decided to make a real fem-beast for the project; unwaxed and unshaven hair and all.

I tried to make the armor look more functional and worn out of necessity rather then an attempt to accentuate the female form... Mostly. Those parts I did choose to accentuate seem to add to the creep factor rather then make it look like something you'd want to take out for an evening. Also, for some reason I got stuck on the logistics of giants and giant sized weapons in an enclosed dungeon, (I know, why bother?) so I gave the figure what I thought would be most effective in that kind of environment; a spear for jabbing and range with a big shield to block off the passage with. I kind of figured running into something like that preventing your progress would be a real pain to get around, whether this is reflected in the rules or not is up to the game designers but I have a feeling it's going to be a mighty duel regardless.

Another fun part of this project is that the art that was done for the game was made based upon my sculpts, not the other way around so it's always a thrill to see stuff like this. Here is the post-sculpt art as well as the pics for the figure... 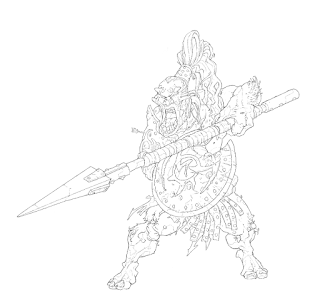 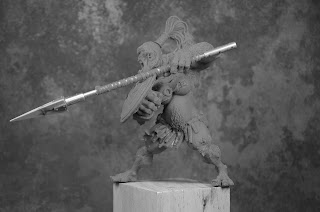 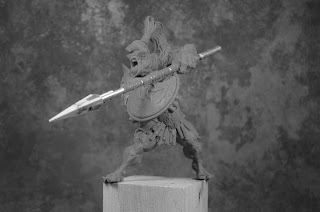 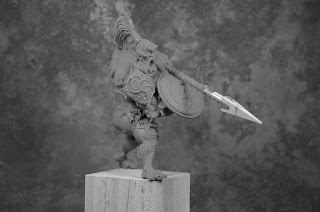 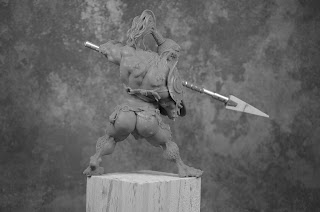 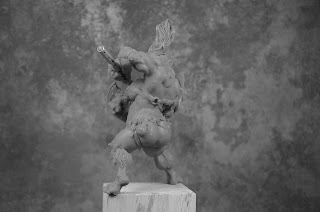 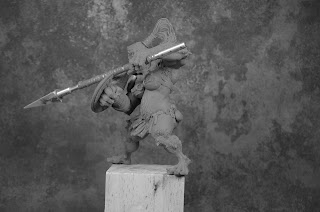 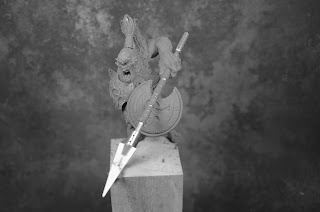