What the hell is it? Part:2 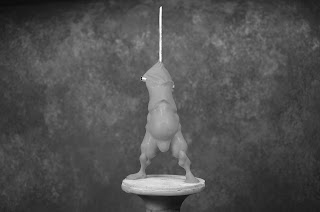 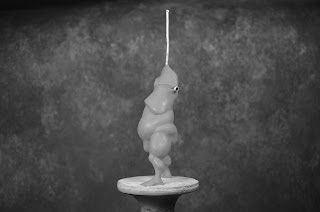 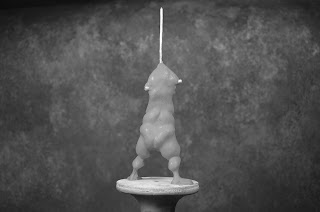 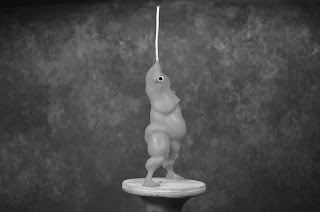 This is a deceptively fast stage of the miniature creation, you're using your hands mostly and just adding balls of putty in the general areas then using a tool to savagely mash them into a general shape. This is the stage that after an hour or two of working on a figure and seeing how much progress you made in such a short time you think, "Hell yeah I can make that deadline!" but once this step is over and you move onto the detail everything slows down drastically. Suddenly you regret taking that evening off to do something fun because now your worried your falling behind schedule so don't let it fool you!

I'm pretty sure this is going to be a troll. People seem to want me to sculpt trolls the most so I thought I would take something familiar and screw with it. I knew I wanted to give it a gut so he's got a lot of bulk there. I also know that he's going to be leaning or holding something high in his right arm so his shoulders a slanted in preparation for that, Whatever it ends up being. What I didn't plan on was his "package,"  usually I put some kind of lump there just as a suggestion of male-ness but this guy's is way more then I intended. Mostly because as I was shaping the gut line I ended up pushing material out of the way to get the stomach where I wanted it. Maybe I'll keep it, we'll see what happens.

What I did was to mix up some greenstuff (Kneadatite) with more yellow then blue. This makes the putty more tacky and cure longer. It's the tackiness I'm needing. I then cover the armature with a thin layer of the mixed  greenstuff, getting on the legs and torso, everywhere I want my Fimo to stick. I don't need much, just enough to use as an anchor for the putty I'm going to sculpt with. After that I take small amounts of Fimo and begin to mash it onto the greenstuff, I want the Kneadatite to grip and hold the fimo in place, without it there isn't much to keep the putty in place while I'm working on it and parts would peal away from the armature. This is more important on the bigger stuff I sculpt rather then something in the 28-35mm range where the weight of the putty is less of a factor.

Once the small amounts of putty have been added I let it sit for a bit so the greenstuff cures to the point is has a good hold on the Fimo and armature. After that I begin adding the larger wads of putty, working it into the armature and playing around with the general mass and shape of the figure. Once I have the basics where I want them I take an old brush and some terpenoid and paint it over the figure. This begins to melt the fimo a bit, turning the surface semi-liquid and I'm able to smooth out the rough angles and lumps of the figure and make it look more natural. The more terpenoid you use the more melted it gets so use sparingly! Also, it will ruin your brush so don't get too attached to it.

After that I go over it again with hand sanitizer, this helps smooth out any brush marks I have made with the terpenoid  and the alcohol in the sanitizer will help the liquid evaporate leaving the figure solid again. I know, this may sound weird but it works and saves a huge amount of time in the long run. The pictures in this post show the figure after this process so you can see what it did.

Now it's ready for some details!