What the hell is it? Part:3

I'm beginning to think I should start labeling these entries like 80's horror movies. You know; What the hell is it? Part III - 3D or Dream Warriors or something like that. Anyway, getting into the details... 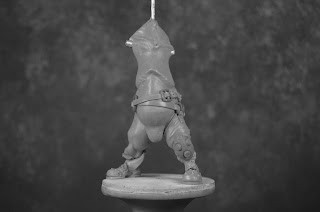 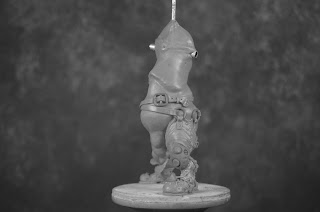 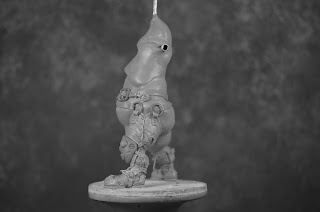 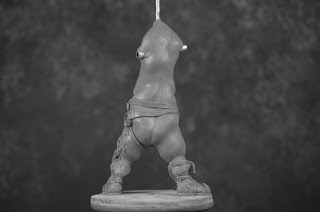 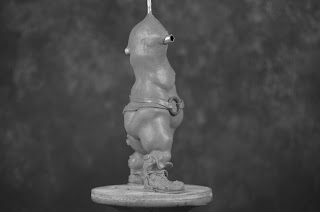 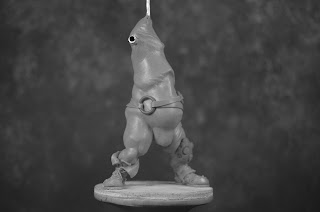 It evolves! It becomes! It is not I who am crazy! It is I who am MAD!

You can begin to see the details I am inflicting upon this poor wad of putty, an asymmetrical fashion design with lots of layers. (I don't know, can you see that?) I decided to avoid a general, specific idea for this guy and make him as eclectic as I possibly can. To do that it's important to be influenced... 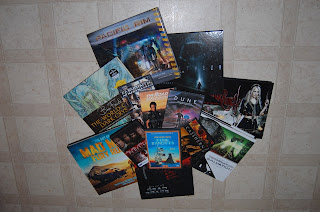 At this stage what's needed for me is visuals. Don't get me wrong, I love a good story, (in fact I can get pretty unreasonable about that,) but I usually play something in the background that has some kind of influence on my personal sculpting to help get me in the mood. It's not the story but more that, if I glance up from my project something interesting is happening on the screen. You know; "Visual." For this I decided to go for some of the more eye-popping things I could think of; Terry Gilliam and Brian Froud seemed like excellent spring boards to leap from and I love me some George Miller for unique ideas. So I pulled out a bunch of my inspirational media for a push. 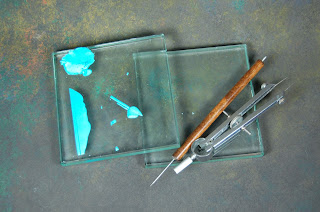 New tools to pay attention to and I can't believe I didn't include them into the usual suspects. Glass plates, caliper and probe. The glass plates are key for acting as a pallet for the putty, it allows you to roll tubes by putting a sausage of Fimo on the plate and rolling out an even length between the two plates or to squash the putty flat so you can use it for lengths of fabric or just to keep your Fimo handy. Very helpful. The caliper is a great assist in making sure you get symmetry between left and right aspect of the sculpt are close. In this case it was the length and width of the feet. The probe is... (wait for it...) A "probe" from an animal dissection kit. Yeah... Just think about why I would have something like that for a second...

The glass plates are from a drink coaster set I got from a craft store. Apparently the marketing idea was that you could put photo's of you and your family in the coaster and while guests drink beverages they could look at pictures of you while you served the drinks. Does that sound... Sane to you? I re-purposed them and now they assist me in my monster-making endeavors. If you want a tool like this you need to find something that is thick and putty will not stick to. The ones I am using are 10mm thick and have beveled edges, not sure where to get them so keep an eye out. Don't get something that's going to crack if you put pressure on it or cut you up when you touch it. Also, if you are using Fimo, DO NOT USE ABS PLASTICS as Fimo will melt it. The caliper is from a drafting tool kit, (Yes, I have drafting / architecture schooling but only at a high school level) and it's one of those tools that you won't use a lot but you'll be happy if you have it. Again, RE-PURPOSED! The probe is pretty much just a needle or pin wedged into the end of a wooden dowel. You can make your own for real cheap but keep in mind that mine IS from an actual dissection kit... Oh, yeah.

Because I sculpt big I found that starting at the bottom and feet, in most cases, works best. You can't build a house without laying a solid foundation and I need to make sure whatever I sculpt above the waistline will be supported by what's below. So I start at the bottom. 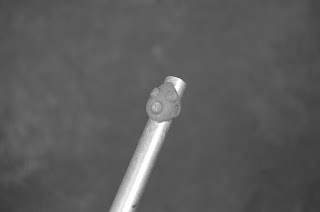 The knee pad was done separately, I have a collection of aluminum tubing and brass rod for various uses. I highly suggest checking this product out, you can find it in your hobby store usually in the RC plane section. I took the caliper, measured the knee and found a piece of tubing that was roughly the same width and sculpted on that instead of the figure. This helps prevent me from mashing-up or deforming the musculature / detail underneath.

Another reason I do this is because it allows me to focus on a specific part of the figure and if I want a piece of detail to really pop out this is how I do it. Things like belt straps and fabric folds are more organic and conform to the shape of the figure and can be sculpted directly on the figure but armor pieces need to look like chunks of metal strapped to a fleshy appendage. Metal beats flesh so the armor pieces that I am sculpting need to look the part which is why I treat them as their own entities. 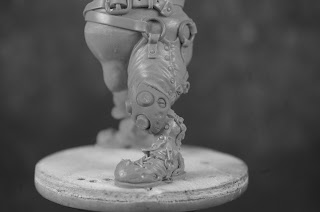 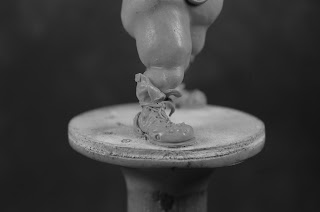 Here are some close-ups of the foot detail including the knee pad attached to the left leg. Folds and straps for the various effects were done by smashing Fimo between two glass plates until thin. Then I cut them up with the hobby knife to get the sharp edges in the putty, remove them from the glass pallets and arrange them so the sharp edges are where you would expect to see something like that. In this case, the edges of quarters or tongue in the boots or anywhere I needed to show separations of fabric.

I'll cover things like screws and rivets later, maybe next post. Again, if you have questions let me know.