What the hell is it? Part:4

I had hoped to have more done by now but I ran into a problem, and that is; the weather. Right now it's the hottest it's going to be all year and for about two weeks I can't get any work done because the heat makes the putty too soft. When you start getting into the 90 degree or more zone for temperature it can change the texture of the putty as well as dry it out. The heat spiked so quickly that it actually began to damage some of my works in progress I had on my table, including this one. I had to wait until it cooled down a bit so I could repair the sculpt. After I had everything fixed I popped it into the oven to lock it all in place. I do this normally so I don't accidentally jab a finger into what I've already worked on and it also makes a solid foundation to support all the upper body's weight but I thought I was going to have a bit more time to play around with the details. Oh well, I can still add stuff later. 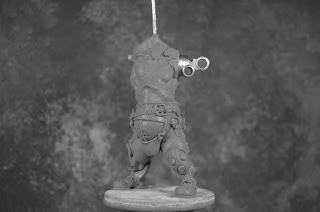 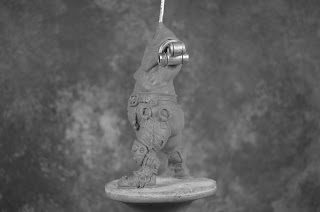 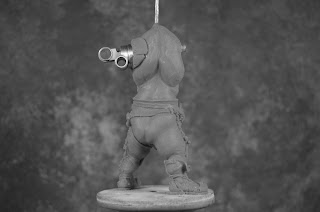 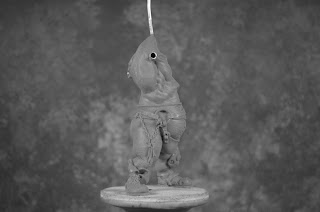 I've decided to give him the obligatory mechanical arm mostly because it will give me a chance to show how I do some of the mechanical work for things like pistons and armor. I've got a rough idea of where this is heading but we'll see. I might change my mind along the way.

1: Mid-line baking; As mentioned before I do this to both help support what I will do next and prevent me from ruining what I have done already. Most of my sculpts get baked about 3-4 times at least but I don't want to overdo it as excessive baking can scorch the Fimo and damage the figure. This is also the core reason I start from the bottom up, it will support all the upper weight without worrying about collapsing.

2: Aluminum and Brass rods; amazingly helpful material to have! You can get this from many R/C hobby shops, normally there is a cardboard standee with all different gauges and diameters and normally the smaller sized rods fit snugly inside the next size ups interior allowing you to make telescoping details and layered effect. Because it's soft it can be cut with a hobby knife and filed with fine tooth hobby files. 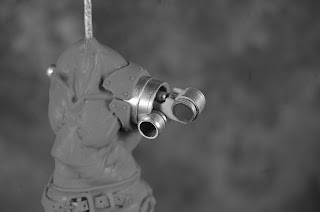 The shoulder is going to be made from a mass of pistons and levers with hoses and wires wrapped about it. In this picture you can see the beginning of the levers which were made from Aluminum tubes of various sizes as well as brass for the actual flange-like coupler for the shoulder. The outermost lever of the shoulder is supported by a piston that is sandwiched between two support struts. The struts were made from Magic Sculpt which I use for a majority of my armor details. It is a 2-part epoxy that is hard as hell once dried. On top of that, if you heat treat it (about 150 degrees) it makes it even harder. I mixed some up and flattened it out then placed it in the oven for about 15 minutes, after that I can sand and file it to the shape I need.

I'll probably be focusing on the mechanical arm next (the hot weather won't mess that up at least) before moving on to the rest so probably next update will have more Aluminum work in it.

Thanks again for checking this out and if you have any questions feel free to ask.