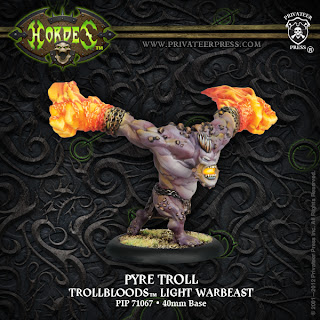 Heeeeey! Privateer released my Pyre troll! This guy was done around November of '10 and was sort of a side project with Ron Kruzie. Something that was a bit off about the original was that he was kinda on the small side, more of a Trollblood then a Troll so we wanted to get his size increased as well as a new pose. I wanted to do something different in that regard so there was diversity on the battlefield, I ended up with a Hulk-like pose of the Troll charging into battle rather then spitting fire. The two things that got changed was that he had fire coming out of his mouth that ended up getting removed, not like a fire ball but rather that his insides were on fire and the flames were licking up the sides of his face. Like a furnace on full blast. The other was the pose; originally he was balanced on his forward foot which I thought made a more dynamic charge but they didn't like that and requested he be re posed so that both feet were touching the base. This was done with a simple cut on the right foot's ankle and the figure leaned back about 30 degrees. I kinda felt that this took away a lot of the implied momentum and made it look more like he was strolling forward to give a hug. Oh well.