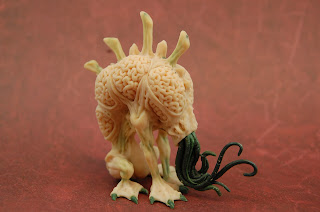 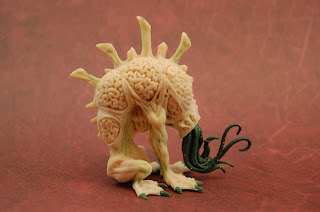 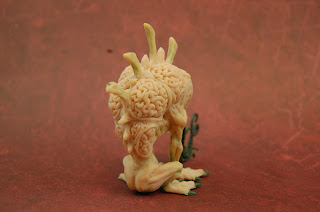 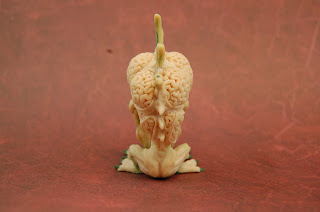 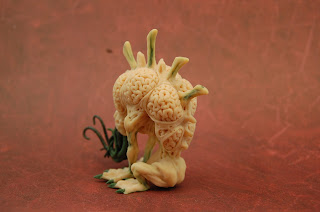 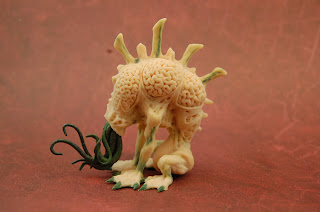 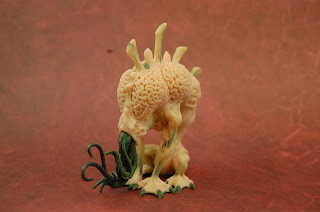 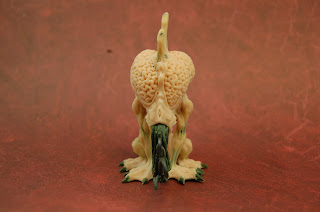 Here is something for you Monpoc fans, a proposed figure that was never used for the Lords of Cthul faction. Much like the, "Extreme," sculpts I did; as in: "I'm inspired to sculpt something on my own," this guy was sculpted after I had done all the figs for the faction. My understanding was that even though PP liked it there was no current place for it so it has been sitting around my works space for a couple of years now. I've got far too many things like this half finished and floating around but I thought I would post this guy to see how or if people would react to it.

I changed the overall design and instead of a fat gut and larger lower body I made him look emaciated, switching the mass to his brain. I remember watching the movie "The Time Machine," ('02 version,) and really liking Jeremy Irons character. The idea of a brain growing down the back really appealed to me and I decided to make that the central focus of the sculpt. His hands and feet are all webbed and three fingered/toed keeping the aesthetics from the other figures in the line but I made them more wiry and lean as if all it's body's nutrients are going straight to the grey matter.  I also had him squatting like a toad from the bulk of his brain and added a fifth eye. A third eye wouldn't seem that impressive since there is already Cthul who have 4 so five makes it just that much better... Right? He is about the same size as guys like Yasheth or Cthugrosh but only because of his vertebrae.
The general idea is that he was a psychic attacker/defender. Maybe causing madness in the opposing forces by flooding their fleshy minds with disturbing nightmares or images of other realms. Anyway, hope you enjoy a bit of what might have been; cortex and tentacles.
Posted by monster.0 at 6:55 PM