I used to draw

...Like, a lot. I was so-so at it but I was always doodling or drawing comics or something but since I got a job as a sculptor I rarely have time to sit down and just draw and to be honest, it's not as satisfying as sculpting. In fact, if I am working on a personal project I usually skip the concept art stage and jump right into the sculpt. I always work on artwork provided by the company I am doing a job for and there is something satisfying by just working off of a loose idea and free form sculpt from there.

A few years ago Ron Kruzie ran across a sketch I did for one of his Warhammer armies from, "Back In The Day," when neither of us did anything on a professional level. ( You can reference some of this story on the Iron Back Spitter post I made a while ago http://monster-zer0.blogspot.com/2010/11/ironback-spitter-king-of-koopas.html ) Ron asked if I was capable of producing concept art? Good question. It had been years since I did anything 2D and the best way to find out was to do it and see what happened.
I did three pieces of art and sent them in, nothing ever came of it but I thought I would post them here just to share. Now, before we get into it I have to do a disclaimer: These are NOT concepts that Privateer will be releasing! I am NOT showing you a preview of, "things to come." These pieces of art are my own ideas based off of Privateer Press's products and was only to see if I was creative enough, and capable of conveying a dynamic idea in the form of a drawing. So that being said if you start the rumor that these are in the works it's all on you.
(And yes, that is what my handwriting looks like, misspellings and all.) 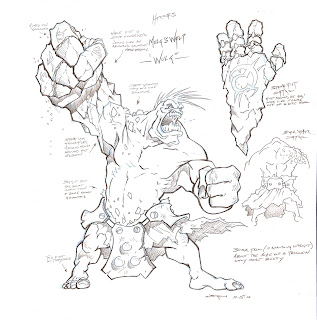 First up is, "Wulg," Mulg's welp. Remember when I told you the bedtime story about how Mulg came into being and the original concept behind him? If not, go look. S'cool, I'll wait... http://monster-zer0.blogspot.com/2010/07/hello-my-name-is-mulg.html Anyway, The idea was that Mulg had suffered from some kind of horrid magic attack, something his troll metabolism just couldn't entirely deal with and the club fist was the best it could do (also the reason for the scar across his eye, chest and arm) So, Wulg was the product of that accident, A welp spawned from, "the most ancients," blown-off arm. Even though he's a welp being from a dire troll and more muy especial then just any old welp (imbued with an ancient earthborn dire trolls abilities and whatever residue magic that caused the accident in the first place) he's grown to the size of a trollkin. One massive stone hand from whence he grew is his main weapon and since he is from a dire troll he's got all the bad attitude that comes with one. some of the fun ideas for rules would be causing earthquakes (a cone effect) by slamming his fist into the ground, being able to move terrain by 1D3 inches in a direction of his choice. The other was that Mulg has animosity towards the welp; if on the same battle field and within a 6" radius of each other the player has to flip a coin; heads Mulg goes about what he was doing, tails and Mulg tries to eat the welp in an attempt to get back the power the little bastard stole from him. I thought it would have added a random and fun element to the game, sorta like some of the older rules for Orks in 40K. I chose the name Wulg as a play on the Mario/Wario nonsense Nintendo did a while ago and in the drawing Wulg's bigass arm should have been his left since that was the arm Mulg had lost in my original concept. 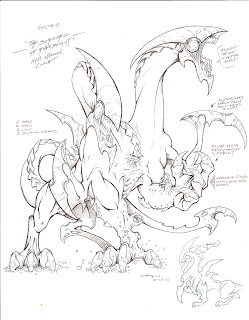 Next is, "The Blessed Of Everblight" A crazy-ass Nyss Warlock uses a complex spell and submerges himself in a spawning cauldron (willingly and still alive) in attempt to become closer to the dragon he worships and this guy is what came out. A Nyss / draconic hybrid, basically a warbeast that can cast. If you look at the chest you can see his head, chest and arm sprouting out of the beast. 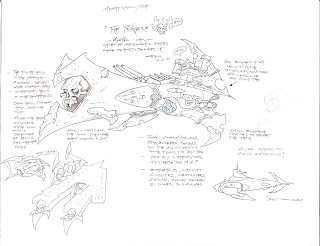 "The Privateers" - This was an idea for MonPoc I had a while ago, a fleet of intergalactic pirates come to Earth to plunder it. Ala Captain Harlock, Star Blazers, Macross, stuff like that. Space cruisers with a battleship theme to it. I thought it was a fun nod to Privateer Press.
Even though I am waaay out of practice I hope you guys still get some enjoyment from this post.
Posted by monster.0 at 7:31 PM